Home » The Embassy of China to Djibouti Grants US$100,000 to IGAD Secretariat 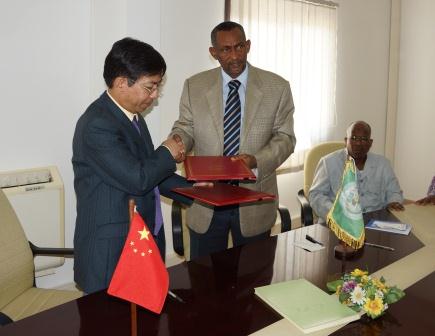 Djibouti, 27-11-2013: The Executive Secretary of the Intergovernmental Authority on Development (IGAD), HE Ambassador (Engineer) Mahboub Maalim, this morning received the Ambassador of China to Djibouti, HE Ambassador Fu Huaqiang, in his office for the signature ceremony of a grant of US$100,000 from the Embassy to IGAD Secretariat.

Ambassador (Engineer) Mahboub Maalim in his opening remarks welcomed the delegation from the Embassy of China to Djibouti led by Ambassador Fu Huaqiang. “I take this opportunity to welcome you to IGAD Secretariat and I very warmly appreciate your efforts in strengthening relations between the people of China and IGAD”, said the Executive Secretary.

After congratulating the Embassy of China to Djibouti for their relentless efforts, Ambassador (Engineer) Mahboub Maalim recalled the last Forum on China-Africa Cooperation that showcased the excellent relations between China and the member states of IGAD in particular. He specifically pointed out to the aid by China in the areas of infrastructure development.

Ambassador Fu Huaqiang highlighted the fact that his country and the member states of IGAD had good and friendly relations. “IGAD contributed and is contributing a lot to peace and development in this region, that is the reason why China is willing to strengthen its relations with IGAD”, he said before announcing that his Embassy was granting US$100,000 to the Secretariat of IGAD.

He concluded that it “will be up to the Secretariat to allocate and use these funds on the basis of its priority needs”.