Home » Statement by His Excellency Eng. Mahboub Maalim, on the Famine in Somalia 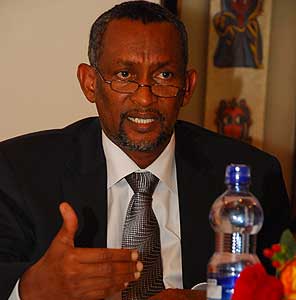 The IGAD region (covering the countries of Djibouti, Eritrea, Ethiopia, Kenya, Somalia, Sudan and Uganda) is yet again witnessing a widespread food crisis in the dryland pastoral areas of Djibouti, Ethiopia and Kenya. Famine is reported to be ongoing in two regions in Southern Somalia: in Bakool and Lower Shabelle as a result of severe and persistent drought. An estimated 11 million people in the region are in need of assistance including 3.7 million in Somalia (2/3 of the population) and 3.2 in Kenya.

IGAD, through its Nairobi-based specialized center for climate prediction (ICPAC), monitors the evolution of climate anomalies in the region for each rainy season. The current severe drought in Somalia was foreseen. However, due to limited access of the International Community to the affected areas, the devastating effect of the drought remained masked until people started fleeing their homes and villages and started streaming into the Dadab refugee camp in neighboring Kenya. It is this refugees arriving with critically malnourished children that alerted the International Community of the famine in Somalia. There are reports of people dying in their tens of thousands and decomposing carcasses of livestock (the main source of livelihood) are a common sight. The Situation has been further compounded by insecurity and the high price of food globally.

ICPAC climate forecast indicates that the drought will continue during the July – September season, hence the need to intensify humanitarian efforts are urgent as possible.

I appeal to the International Community to step up the delivery of humanitarian assistance and establishment of nutrition centers for the acutely malnourished children.