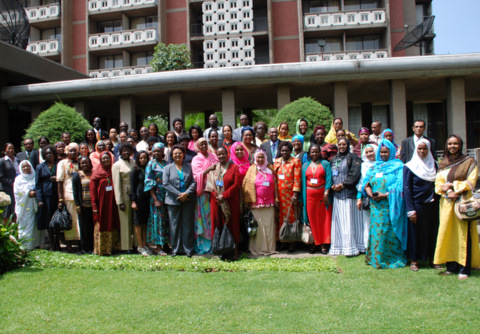 (IGAD-Addis Ababa) Women leaders from IGAD Member States have gathered in Addis Ababa to assess the achievements and challenges of women engagement in peace building and security initiatives in the region as well as learn from each other and other experiences elsewhere on how to deal with conflict situations.

The four-day conference that has attracted the participation of ministers, members of parliament, representatives of UN agencies and the African Union Commission as well as officials from the civil society will also review the status of ratification and domestication of relevant regional and international instruments by IGAD Member States.

Opening the conference, the President of the Federal Democratic Republic of Ethiopia, Ato Girma Wolde Giorgis called on the distinguished participants to remain focused on the attainment of the Millennium Development Goals that include eradication of poverty, achievement of universal primary education, reduction of child mortality and improvement of maternal health. Other goals address efforts to combat HIV and AIDS and other diseases, ensure environmental sustainability and provide financial assistance for development.

Though time is running out, the President noted that Ethiopia was one of the countries that had made remarkable progress in gender equality and the empowerment of women through promulgation of laws that ensure equal participation and upholding women’s rights.

During the opening ceremony, the African Women’s Decade that was declared in February 2009 by the 12th Ordinary Summit of AU Heads of State and Government in Addis Ababa was launched in the IGAD Region. In addition, the UN Women and the Africa UNiTE Campaign to End Voilence against Women and Girls were also launched in the region. The latter is part of a global initiative by the UN Secretary General.

The conference ends on Friday 29th April 2011 with the creation of an IGAD Women and Peace Forum to follow up on the outcome of the conference that will be contained in a declaration.