26-04-2018, Djibouti (Djibouti): The Minister of Foreign Affairs of Djibouti, H.E Mahamoud Ali Youssouf, IGAD Executive Secretary, H.E. Amb (Eng) Mahboub Maalim, and the Acting Assistant Secretary-Bureau of African Affairs of the US Department of State, H.E Donald Yamamoto, yesterday evening officially inaugurated the IGAD Center of Excellence for Preventing and Countering Violent Extremism (ICEPCVE) in Djibouti. The Regional Strategy for Preventing and Countering Violent Extremism in the Horn and Eastern Africa Region was also launched on the same occasion. 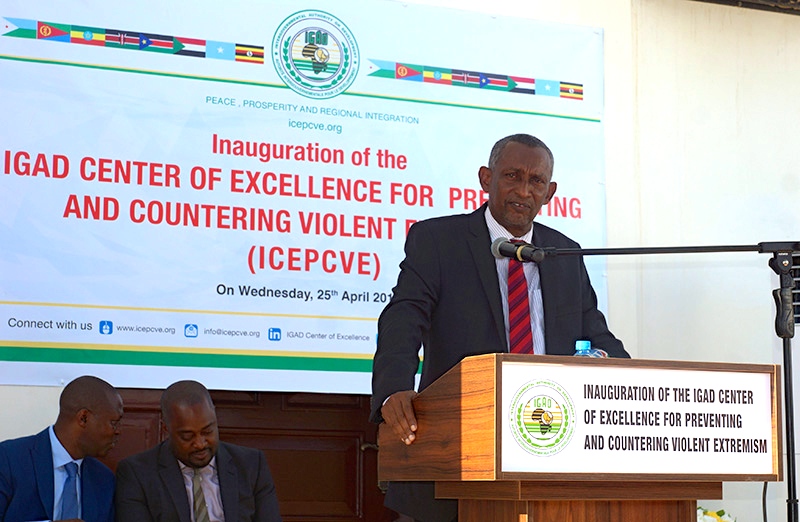 The commonly shared views during the various speeches by the prime officials were the necessity for soft power in the fight against extremism and the many achievements by the Center during the one year and a half it has been operating with limited resources.

The IGAD P/CVE Center of Excellence is a premier institution that is offering a dedicated platform to institutionalize the prevention and countering of violent extremism in the Horn and Eastern Africa Region. This Center of Excellence is intended to serve as a resource for governments, civil societies, youth, religious leaders, experts, practitioners, business people, and others interested in addressing violent extremism.

The Center’s focus areas include but are not limited to:

Training and Learning: providing training and practical tools to enhance the capacities of government and non-government stakeholders to design and implement effective programs and policies to counter violent extremism.

Counter-Messaging: focusing on building the capacity of credible local partners and potential partners to develop and disseminate their own counter-messages and alternative narratives, and to amplify existing ones.

Research and Innovation: catalyzing more research to gain a deeper understanding of the localized drivers of violent extremism, and developing new ways to effectively counter it.