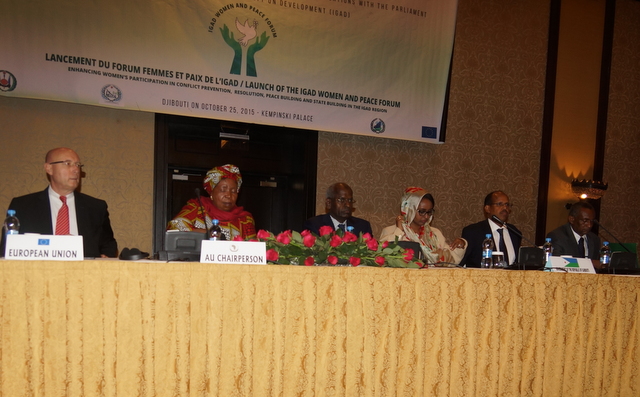 (IGAD – Djibouti) The launching ceremony of the Board of the IGAD Women and Peace Forum (IWPF) was on October 25, 2015 in Djibouti City.

The launching ceremony was presided over by H.E. Mr. Abdoulkader Kamil Mohamed, the Prime Minister of the Republic of Djibouti and graced by the presence of the Chairperson of the African Union Commission, H.E Dr. Nkosazana Dlamini Zuma .

Prior to the launching ceremony the board members elected the Republic of Djibouti as the Chair of the Board, Kenya as the Vice and Ethiopia as the secretary.

During the launching ceremony H.E Amb. (Eng) Maalim Mahboub, the Executive Secretary of the Intergovernmental Authority on Development underlined that  peace is not only about ceasefires, disarmament, demobilization and resettlement but goes beyond the absence of violence into inclusive political processes, protection of human rights in the post war contexts and pursuit of justice and reconciliation within which the IGAD Women and Peace Forum  fits.

He also acknowledged the role and support of the European Union, African Union Commission and other development partners on the attainment of gender equality and women’s empowerment in IGAD Member States and the rest of the continent.

The Minister for the Promotion of Women and Family Planning in the Republic of Djibouti; H.E Ms Hasna Barkat Daoud on her part highlighted the importance of women in the peacemaking processes, social and economic development as well as regional integration not forgetting their role in preventing war through their influence as wives, mothers and daughters.

IGAD was applauded for making the Forum a reality having been launched in 2013 and for being a voice for women and giving women recognition and visibility for their contribution to society in all forms of social and economic development as well as peace and security.
H.E Dr. Nkosazana Dlamini Zuma in her statement urged the women to pay more attention to education and skills, the single most important factor in speeding up development and creating lasting peace.

She added that as stipulated in the Agenda 2063 during the year of women, the African Union is committed to advance women and girls in every area of human endeavour: in education, science, technology, mathematics and research; in agriculture and agro-processing, as entrepreneurs and in the judiciary.
It is to be recalled that members comprise of three representatives from the Executive, Legislature & Civil Society nominated by IGAD Member States whose main objective is contribute to the strengthening of women’s stewardship of the gender agenda in the context of peace building and conflict resolution in East and Horn of Africa.

The other objectives include; to appraise relevant stakeholders on the gender, peace and security challenges in the IGAD region; to raise awareness on the establishment of the IWPF and build strategic partnerships with key stakeholders for its functionality and effectiveness; to conduct election of office bearers to execute the Forum and to orient members of the IWPF Board on their roles and build consensus on priority areas of action for the short and medium terms.

In attendance were development partners, ministers and high officials of the Republic of Djibouti and representatives of civil society organizations.