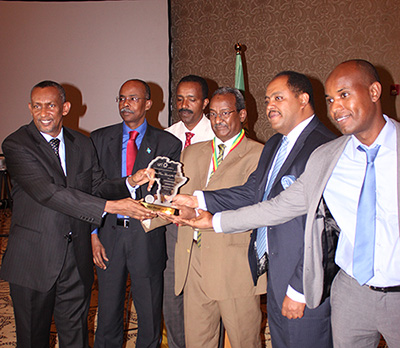 The Ambassador of the Republic of the Sudan to Djibouti and Permanent Representative to IGAD, HE Hussein Elamin Elfadil, in the name of IGAD member states, along with the Executive Secretary of IGAD, Ambassador Mahboub Maalim, received the Award from the hands of the Regional Director of URI for Africa, Ambassador Musie Hailu.

Ambassador Mahboub Maalim, highlighted that it was “much gratifying that such an internationally recognized organization is awarding IGAD this yearly award”. “This Award is another wake-up call for us to do even more in the area of peace-building in our region”, he said.

Ambassador Sudan, in his opening remarks, congratulated URI for their efforts in contributing to peace building. He also lauded IGAD member states commitment to bring peaceful solutions to crisis before congratulating IGAD Organization for the relentless efforts in carrying out their duties.

In his turn, Ambassador Musie Hailu briefed the audience about URI that is “a global interfaith Peace organization with Consultative Status in the United Nations Economic and Social Council and is working to promote enduring daily interfaith cooperation (…)”.

“URI have been following with great interest and appreciation the great role IGAD is playing in promoting regional integration, peace, security, environmental protection and overall development,” he said.

He then announced that “this year the prestigious URI Africa Ward is going to be presented to IGAD, which he did to close the award ceremony.