Nov. 27, 2018, DJIBOUTI (Djibouti): The Executive Secretary of the Intergovernmental Authority on Development (IGAD), H.E. Amb (Eng) Mahboub Maalim, this morning was at the Embassy of Ethiopia to Djibouti to wish farewell to the Ambassador of Ethiopia and Chair of IGAD Committee of Ambassadors, H.E. Ambassador Shamebo Fitamo, who is called for other functions in his home country. 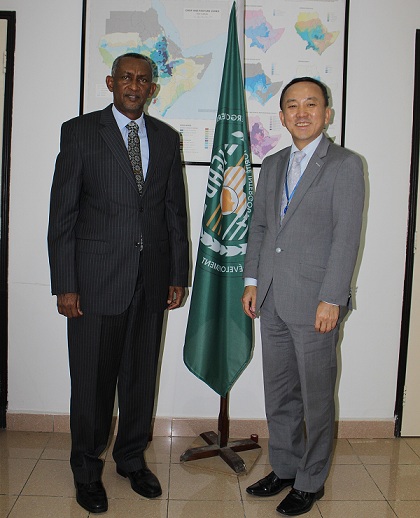 The Ambassador of Ethiopia in his turn expressed his satisfaction to have been working with the Executive Secretary on numerous areas and issues with success. He noted the many achievements registered by the regional organisation the time Amb Maalim has been in charge, and above all the commendable growth in size the organisation has undergone.

During the same day, the Executive Secretary received in his office the Minister-Counsellor and Consul-General of the Republic of Korea to Ethiopia, H.E. Park IL. The two parties discussed ways of deepening working relations between Korea and IGAD.