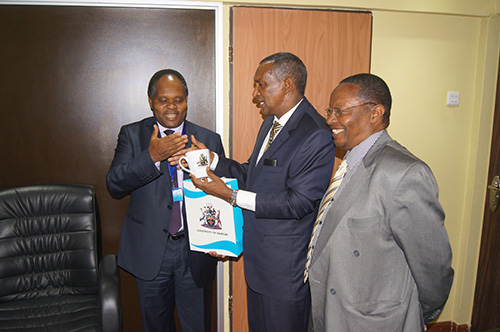 Amb Mahboub congratulated Prof Peter Mbithi for his appointment and thanked the university for responding favorably to the requests made four years ago. These included the secondment of Prof Laban Ogallo and Dr. Munyua Muchina to serve as directors of the IGAD Climate Prediction and Application Centre and the IGAD Centre for Pastoral Areas and Livestock Development respectively.

Furthermore, the university has since August 2013 been offering a degree program in dry-land economics and agro-ecosystem management through the IGAD Sheikh Technical Veterinary School (ISTVS) based in Somaliland. Following the success of this program, the IGAD Executive Secretary request the Vice Chancellor to consider offering post-graduate degree courses and establishing a distance learning facility for the under-graduates and civil servants in the war-torn country.

“This will go a long way to build capacities of the lecturers at the school and the civil servants emerging from conflict situations”, stated Amb Mahboub, pointing out that the school was also receiving similar support from Makerere and Mekelle Universities in Uganda and Ethiopia respectively.

Prof Mbithi recalled being part of the team that conceived the partnership and assured IGAD of continued commitment to collaborate and support the school. He further promised to build on what others before him had started.

“It is part of our mandate to tackle the many challenges that Africa and the region faces including poverty and food insecurity”, reiterated the Vice Chancellor, announcing that the university had just been ranked seventh in Africa and therefore more than ready to partner with other institutions. He added that the Wangari Maathai Institute for Peace and Environmental Studies provides courses relevant to Somalia and other countries in the region emerging from conflict situations.

In conclusion, it was agreed that work plans would immediately be drawn, setting out clear objectives of the partnership and fast tracking the establishment of the distance learning facility.