The Executive Secretary of the Intergovernmental Authority on Development (IGAD), HE Amb. (Eng.) Mahboub Maalim, met with the President of the African Development Bank (AfDB), Mr. Akinwumi Adesina, at AfDB Headquarters in Abidjan, Ivory Coast, on November 23rd.

Mr. Adesina welcomed the Executive Secretary in his office and thanked him for the visit.

Amb. Maalim briefed the President of the AfDB of programmes at IGAD and discussions focused on sustained collaboration between IGAD and AFDB, and particularly on the resilience agenda as IGAD embarked on a vast programme dubbed Drought Disaster Resilience and Sustainability Initiative (IDDRSI) that stemmed from the Heads of States and Governments Nairobi Summit Decision of September 2011.

Amb. Maalim and President Adesina held very fruitful discussions that will soon translate into tangible programming where IGAD might get access to more funding from AfDB in this matter and more.

It should be noted that IGAD in the past benefitted funding from AfDB for various development programmes.

Also, a high level delegation made up of thirteen Advisors to the Board of Directors of the African Development Bank (AfDB) visited the Secretariat on a study tour from April 10th to 14th, 2016 in order to familiarize with IGAD, its mandate, programmes, challenges and opportunities.### 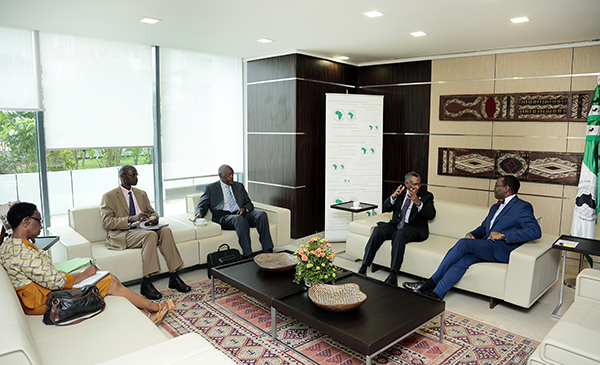