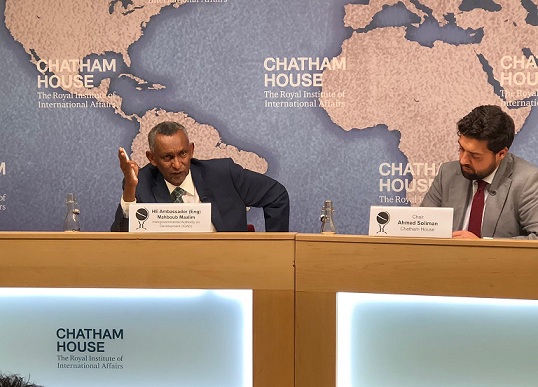 03 May 2019, LONDON (United Kingdom): The Executive Secretary of the Intergovernmental Authority on Development (IGAD), H.E. Amb (Eng) Mahboub Maalim, this evening concluded successful engagements in the UK with a speech at the Chatham House-the Royal Institute of International Affairs based in London, a “world-leading centre for policy research & debate on Africa’s politics”.

Amb Maalim presented on “The Future of IGAD: Responding to New Realities in the Horn of Africa”.

In the morning, the Executive Secretary had a productive meeting with Mr Julian Reilly, UK Envoy for the Horn of Africa & the Red Sea at the Foreign and Commonwealth Office in London. They discussed regional developments and IGAD’s role.

Amb Maalim took the opportunity to also meet with senior officials including the Head of Department for International Development (DFID) East Africa and the new UK Envoy for the Horn and the Red Sea.

The UK Government appreciate the good work of the IGAD Secretariat and have shown interest in exploring further engagement and support.

The Chatham House hosted African head of states and governments.

During his mission, the Executive Secretary took the time to meet and interact with members of the diaspora from IGAD countries.