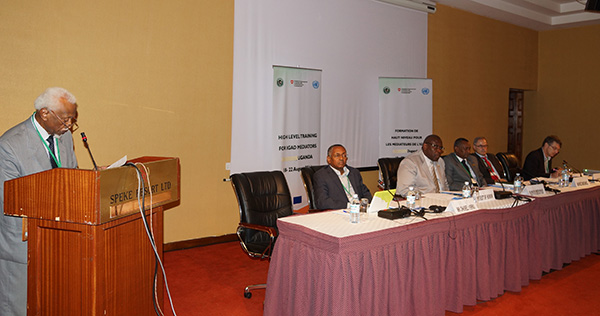 This five-day course is organized by the IGAD Peace and Security Division (PSD) with financial support from the European Commission (EC) and facilitated by the Swiss Federal Department of Foreign Affairs (FDFA) with support of the United Nations’ Mediation Support Unit (UN-MSU).

The objective of the course is to strengthen IGAD normative capacity on preventive diplomacy, mediation and train its mediators on skills to manage and resolve conflict utilizing home grown solutions to home problems. It will contribute to more effective IGAD mediation by deepening the knowledge and enhancing skills of the participants through simulation exercises, expert inputs and collective sharing of experiences and lessons with focus on IGAD led or IGAD supported mediation processes.

IGAD established its Mediators roster of 21 imminent persons nominated by respective member states who will be deployed upon approval by the IGAD’s Council of Ministers of Foreign Affairs.

Mr. Murezi Michael, in his opening remarks, highlighted that it was a pleasure for him to address the audience on behalf of the Minister of Foreign Affairs of Switzerland who is very much committed to Mediation affairs. “Promotion of peace is one of the pillars of our new Constitution, and it is in 2005 that we decided to adopt a professional approach to Mediation. Therefore, research and lessons learned regarding mediation, capacity building and training of mediators, topical experts and parties to a conflict are very important for Switzerland,” Mr. Michael said. He added that the Swiss Government signed a Memorandum of Understanding addressing Mediation and Federalism with IGAD.

Mr. Nathan, on his side, reminded the participants that “when mediation fails in violent environments, thousands, tens of thousands people lose their lives”. “Mediation is a difficult job to perform as Mediators with soft attributes are not always confronted to cooperative parties,” he said. He added that this training course will contribute to adding value to participants’ competencies in Mediation.

Ambassador Maalim thanked the participants for their commitment to peace and security in the IGAD region and hailed the IGAD Peace and Security Division for organizing such a course. He extended appreciation to the Swiss Government for supporting IGAD in its ongoing broader institutional reforms. Ambassador Maalim called on the HE Mr. Abdelrahman M. SwarElzahab, former transitional President of the Sudan participating as a member of the IGAD Mediation Roster, for a few sentences to his peers in the audience.

The Guest of Honor, Hon. Kiyinga, saluted “IGAD for coming up to coordinate various mediation processes after setting up a Mediation Unit”. Hon. Kiyinga assured that “the Council of Ministers of Foreign Affairs will definitely approve of it once presented to them”. As a conclusion to his remarks, he wished the participants fruitful deliberations and declared the High Level Mediation Course open.

The IGAD peace and security agenda is guided by the Africa Peace and Security Architecture (APSA), accordingly, IGAD’s vision as defined in both its Regional Strategy and Peace and Security Strategy, reflect the same spirit and substance of that the African Union (AU) which envisions an integrated, prosperous and peaceful Africa.