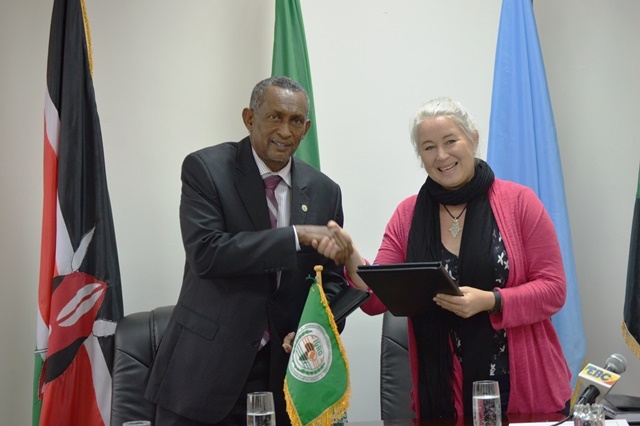 Addis Ababa, Ethiopia, August 31 2016
– The Intergovernmental Authority on Development (IGAD) and Life & Peace Institute (LPI) signed a Memorandum of Understanding on August 31, 2016 at the IGAD office in Addis Ababa. The cooperation agreement was signed by the Executive Secretary of the IGAD, His Excellency Ambassador (Eng.) Mahboub Maalim and the Executive Director of the Life & Peace Institute, Dr. Judith McCallum.

The Memorandum of Understanding (MoU) will promote collaboration between the two institutions with a view to promote peace and security in the Horn of Africa. According to Dr. McCallum, “the MoU is a stamp of approval for the work that LPI does in the Horn of Africa, and it is an important milestone for LPI to formalize its relationship with IGAD”. Beyond the cooperation between the two entities, the collaboration seeks to engage a broader range of relevant stakeholders to further bolster the exchange and joint activities between IGAD, civil society and academia in the region.

The signing of the MoU follows longstanding engagement between the IGAD and LPI, dating back to 1999 when LPI provided consecutive capacity building trainings in peacebuilding for IGAD Secretariat officials. Since 2014, LPI’s Horn of Africa Regional Programme has collaborated with IGAD’s Conflict Early Warning and Response Mechanism (CEWARN) in a pilot project seeking to develop new regional policy options that would enhance small-scale, cross-border trade in the Horn of Africa in a manner that also improves the human security of the region’s borderlands. The pilot project, which touches the livelihood scheme of over 43% of Africans, has engaged 14 CSOs, 43 academics and customs, trade and border security officials from all IGAD member states to date and the results will be publicized more broadly in late 2016.

On the signing occasion, IGAD Executive Secretary noted that “LPI’s contribution ineasing informal cross-border trade in a way that enhances human security in the region has injected resources to this area of engagement, brought on board civil society and academia and has created space for IGAD to use its member state leverage to generate political priority for this important issue”.

IGAD is a sub-regional intergovernmental body comprising the eight countries in the Horn of Africa, seeking to expand regional cooperation, integration and promote peace and stability in the region. Life & Peace Institute is an international non-governmental organization that supports and promotes non-violent approaches to conflict transformation through a combination of research and action. The thirty-one year old Institute works in several countries in the Horn of Africa and Great Lakes regions and has a regional office in Addis Ababa managing the active partnerships with the African Union and IGAD.