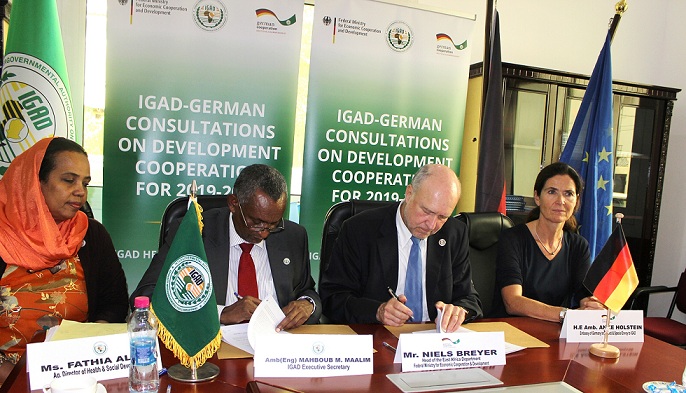 July 12, 2019 (DJIBOUTI, Djibouti): The Executive Secretary of the Intergovernmental Authority on Development (IGAD), HE Amb. (Eng.) Mahboub Maalim, on Thursday received a delegation from the Federal Ministry for Economic Cooperation & Development of Germany (BMZ) led by the Ambassador of the Federal Republic of Germany to Djibouti & Special Envoy to IGAD, HE Ms. Anke Holstein.

More specifically, the Bonn-based delegation hailed from the Division for East Africa of the Federal Ministry BMZ and came to the Secretariat of the regional organisation under the leadership of the Department’s Head, Mr. Niels Breye, for the purpose of joint consultations on development cooperation between the IGAD and the Government of the Federal Republic of Germany for the next couple of years.

At the end of the one-day long meeting, Amb. Maalim and Mr. Breye signed a summary report of the discussions and agreed that the next consultations on development cooperation between the Intergovernmental Authority on Development (IGAD) and the Government of the Federal Republic of Germany are to take place in Djibouti in early 2021.