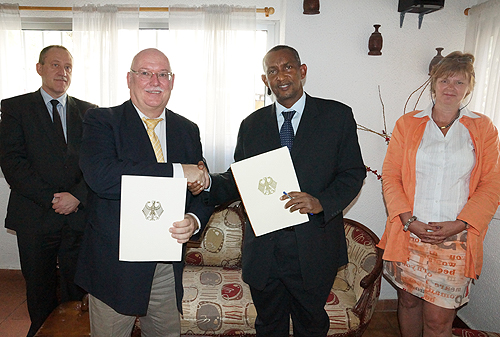 The new agreement will enhance the capacity of IGAD to achieve its mandate and increase drought resilience in the region. On behalf of the German Ministry for Economic Cooperation and Development GIZ has been supporting IGAD Headquarters in Djibouti in diverse IGAD programs including food security, climate information systems (ICPAC), the Conflict Early Warning and Response System, IGAD Peace and Security activities as well as other crucial policy and working documents that strengthened the institutional development of IGAD and, specifically in the last years, IGAD’s task to secure regional peace and security.

“From now on, IGAD and Germany are going to cooperate through technical cooperation and through financial cooperation to strengthen the mandate given to IGAD by the Heads of States in September 2011 to monitor and politically coordinate the national and international efforts to improve drought resilience,” said the Director of East Africa Division of the German Federal Ministry for Economic Cooperation and Development and head of the delegation Dr. Ralf-Matthias Mohs.

The German government will contribute 3 million Euro for further Technical Assistance to the IGAD Secretariat which will be implemented through GIZ. In addition Germany will support IGAD member states with 20 million Euro for specific medium and long term oriented drought resilience programs. This regional investment fund will be implemented by KfW which is the promotional bank of the German Government. The drought resilience fund shall foster economic development and regional integration in the Horn of Africa. IGAD Secretariat will assure harmonization and coordination of country investment plans at policy level. The recent agreement on the 20 million Euro Regional Fund marks the very beginning of Financial Cooperation between the partners IGAD and the German Government.

The delegation was briefed from the professional staff of IGAD on the status of the programs supported by the German government as well as the 20 years lasting history of collaboration between the organization and Germany’s government owned agency GIZ.

“The German government has always been on our side and I am deeply convinced that the new agreement is a testament of the friendship and trust that has always existed between IGAD and Germany” said the Executive Secretary Eng. Mahboub Maalim.