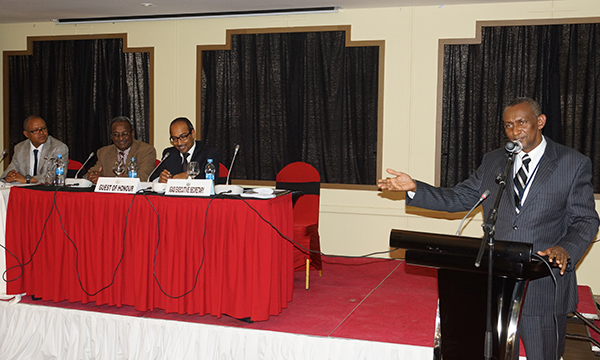 Djibouti, 11-10-2015: The Executive Secretary of the Intergovernmental Authority on Development (IGAD), HE Ambassador (Eng.) Mahboub Maalim, and the Secretary General of the Ministry of Foreign Affairs of Djibouti, Mr. Mohamed Ali Hassan, this morning opened a validation workshop of the IGAD State of the Region Report in the presence of Mr. Berhane Fisseha, IGAD Focal Point for the Ministry of Foreign Affairs of Ethiopia, and the Ambassador of the Sudan to Djibouti.

This five-day workshop is the final touch to the process of the Formulation of the IGAD Regional strategy and Implementation Plan 2016-2010 that started 13 months ago with baseline studies at national level on IGAD priority sectors, according to IGAD Planning and Coordination Programme Manager, Mr. Ahmed Y. Habbane.

To the Executive Secretary of IGAD, the process of the formulation of the IGAD 2016-2020 plan is important for the sake of an objective planning built on a comprehensive document that looks at the current dynamics inside and outside the region.

“This formulation process that consists in building on baseline studies at national has the merit to be more precise, more technical, and more comprehensive”, Ambassador Maalim highlighted in his opening remarks.

After looking into in-country situations around thematic areas or priority sectors such as Agriculture, Natural Resources and Environment, Regional Cooperation and Integration, Peace and Security, Social Development, Gender Affairs, “we started with national-level reports by priority sector that we then compressed into a regional document”,  he continued.

And the formulation process as whole is following this logic of compression of sector data from member states into one overarching IGAD Strategy and Implementation Plan 2016-2020.

The Secretary General of the Ministry of Foreign Affairs of Djibouti, Mr. Mohamed Ali, highlighted the need for the “formulation of a results-oriented and realistic strategy which is aiming at a new impulse”.

“I am convinced that this meeting starting today is a golden opportunity that will enable us to discuss all together about our next strategy in view of achieving a sustainable integration at the service of our populations”, he said.

He continued that, while not turning a blind eye to the threats in the region, the final document should also reflect on the diplomatic efforts at regional level towards peace, security and regional integration.

He then officially opened the validation workshop of the IGAD State of the Region Report.