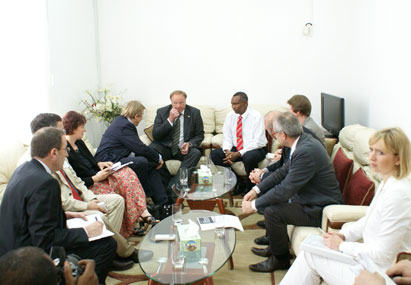 The Minister for Economic Cooperation and Development of the Federal Republic of Germany, Mr Dirk Niebel on Sunday, April 11 2010 met with the Executive Secretary and staff of IGAD Secretariat.

The Executive Secretary of IGAD, Eng. Mahboub Maalim, expressed his gratitude for the visit of the high level German delegation and Germany’s support to the Secretariat.

On his part Mr. Dirk Niebel, noted the importance of IGAD in the development and security of the region and expressed his government’s interest in assisting the Secretariat build its capacity.