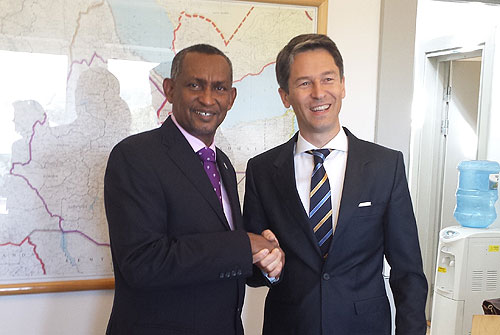 The Executive Secretary of IGAD H.E. Amb(Eng.) Mahboub Maailm received the official accreditation letter of the Swedish Ambassador to IGAD.

On the occasion that took place at the Swedish Embassy in Addis Ababa, on December 3, 2014, H.E. Ambassador Extraordinary and Plenipotentiary of Sweden to the Federal Democratic Republic of Ethiopia, Ambassador Jan Sadek presented his accreditation to IGAD.

He is officially appointed a special representative of Sweden to the Intergovernmental Authority on Development (IGAD).

In addition to this event, the Executive Secretary H.E. Amb(Eng.) Mahboub Maailm also met H.E Ambassador Per Lindgärde, Senior Advisor for the Horn of Africa at the Ministry for Foreign Affairs in Stockholm who was previously the  Sweden’s Ambassador to Nigeria and Deputy UNSRSG for Somalia.

During the meeting, views were exchanged regarding peace processes and issues of regional integration. H.E. Amb(Eng.) Mahboub Maailm briefed the Swedish delegate about the development challenges the region has been facing and  the encouraging achievements as a result of the IGAD programs.

H.E Ambassador per Lindgärde finally suggested that the Executive Secretary to visit Sweden around the month of March 2015 and meet various departments. He said this will be very important as Sweden is preparing a regional strategy. The Executive Secretary accepted the offer and promised to prepare.

Sweden has been a long-term funding partner of IGAD, mainly in the peace and security areas.