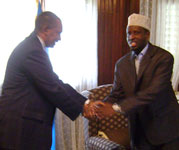 The Executive Secretary, Eng. Mahboub Maalim, paid a courtesy visit to the President of Somalia, Sh. Sharif Sh. Ahmed. Eng. Maalim congratulated the new Somali President and assured the support of IGAD in the rebuilding of the country.

The Executive Secretary also met with the Prime Minister of Somalia, Mr. Omar Abdirashid Ali Sharmarke and exchanged views on the region and Somalia in particular.

On February 13, 2009, Sh. Sharif Sh. Ahmed nominated the Prime Minister at a ceremony in Djibouti, the Republic of Djibouti. In his acceptance speech, Mr. Sharmarke pledged to work hard to reconcile and unite his nation.