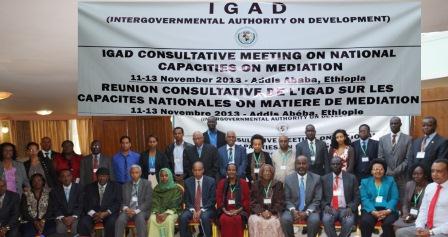 This IGAD Consultative Meeting on Mediation follows the IGAD Committee of Ambassadors Meeting of September 2012 in Djibouti that was aimed at operationalizing the newly established IGAD Mediation Support Unit (MSU).

On behalf of the Executive Secretary of IGAD, Hon. Netsannet Asfaw, in the opening remarks, reminded the audience that despite encouraging results, such as the Sudan peace process and the IGAD-brokered peace efforts in Somalia, the region was “still dealing with potential threats”. She also highlighted that “initiating this Mediation Support Unit is all about institutionalizing our efforts”.

“It is within this context and rationale that we have initiated a process by which efforts of our Member States in mediating conflicts would be institutionalized, capacities in the region enhanced, and people of the region enabled to the part in peace processes through an institutional and inclusive approach,” she said in substance.

Co-chairperson Ato Tesfaye Yitayew regretted that “IGAD region witnessed conflicts that claimed so many, many lives”. But he expressed hope now that IGAD has scaled up even more its efforts towards bringing peace back to the region. He also showed confidence that this meeting would benefit the audience greatly.

On the second day of the meeting, work groups by country (Djibouti, Ethiopia, Kenya, South Sudan, Sudan, and Uganda) were formed in order for them to deliberate on the possible areas of IGAD’s engagement to contribute to their home countries’ national capacity on mediation. Then, the delegations successively briefed their counterparts on mediation institutional capacities of their own countries, suggested IGAD ways and means to achieving harmonized approach for conflict mediation, prevention, and resolution at their national levels, and also came up with ideas to make conflict mediation gender sensitive.

Before coming to the conclusion of the meeting on the third day, an initiative in-the-making by IGAD Peace and Security Division titled “Post Conflict Reconstruction and Development” (PCRD) was introduced to the audience for their situational awareness of the expanded and complementary institutionalized efforts by IGAD towards peace culture in the region.

After wrapping up the meeting, Hon. Netsannet Asfaw let the audience know how honored she was to have been working during these three days with participants so well-versed in the matter, and thanked them “for the high-profile ideas, suggestions, and also recommendations that will for sure be integrated in the mediation framework”. “We need peace and security to achieve development, that’s where MSU has a great role to play”, she concluded before thanking every participant for sharing knowledge in “an exciting mood” that contributed to making the meeting “very productive”.