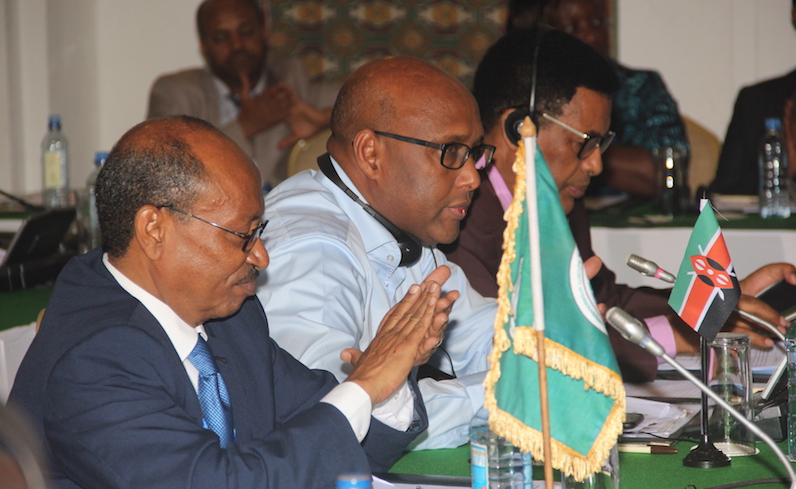 In his official opening remarks Cabinet Secretary for Industry, Trade and Co-operatives of the Republic of Kenya Mr. Mohamed Adan Abdulla welcomed the draft framework as it aligns strongly with regional and continental efforts in facilitating intra-Africa trade. He further emphasized the framework’s value in ensuring livelihood and security concerns of borderland communities are addressed.

Amb. Dina Mufti, Ethiopian Ambassador to Kenya who spoke on behalf of the Ethiopian minister of trade stated the importance of informal cross-border trade in IGAD borderland regions as an innovative and resourceful practice that can be leveraged for resilience, peace and prosperity of communities in these areas.

Mr. Mohammed Moussa, IGAD’s Director of Agriculture and Environment Division on his part stated that: “As frontiers of regional cooperation and integration, borderlands are central to the promotion of peace, security and development in the entire region.”

He added, despite their historically disadvantaged position and dire socio-economic and security conditions, borderlands currently possess high potential to transform into centers of robust economic activity in light of ongoing huge investments in infrastructure as well as discoveries of natural resources in these areas. He added, currently informal cross-border trade is inextricably linked to livelihoods of borderland communities.

The policy framework is a product of an extensive work done to solicit views of borderland communities and informal traders; IGAD Member State officials of customs, trade and security; civil society; academia and other relevant stakeholders on the nexus between Informal Cross-border Trade (ICBT) and Cross-border Security Governance and how ICBT can be leveraged to enhance cross-border security.

The policy framework development was also led by IGAD’s Conflict Early warning and Response Mechanism with the support of partner institutions namely – the Horn of Africa Regional Programme of the Life and Peace Institute (LPI), the Organization for Social Science Research in Eastern and Southern Africa (OSSREA) and the Inter-Africa Group (IAG). It is aligned with important gains made in formulation and harmonization of trade policies at regional and continental levels through the Common Market for East and Southern Africa (COMESA) as well as the recent milestone achievement of the African Union Commission (AUC) in gaining broad support towards the realization of the African Continental Free Trade Area (AfCFTA).

In a communiqué issued at the end of the ministerial meeting that bears their signatures, the ministers expressed that they adopt the policy framework in full support of its core objectives, namely: