Talks resume between President Kiir and Dr. Riek Machar ahead of 5 March deadline 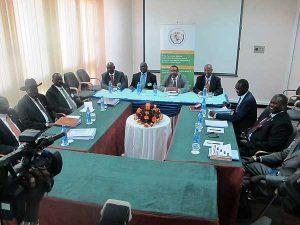 This afternoon, in the presence of Ato Hailemariam Dessalegn, Prime Minister of the Federal Democratic Republic of Ethiopia and Chairperson of the IGAD Assembly, President of the Republic of South Sudan Salva Kiir Mayardit and Leader of the SPLM/A (In Opposition) Dr. Riek Machar resumed face-to-face talks on the outstanding issues of the mediation agenda as per the 1 February 2015 Working Document. Amongst the critical issues are the structure of the executive of the Transitional Government of National Unity, the power sharing ratios, the composition of the National Assembly and transitional security arrangements.