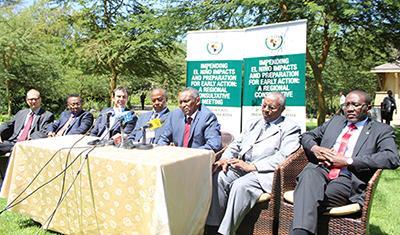 IGAD, Member States and Development Partners Agree on a Common Stance to Respond to El Nino 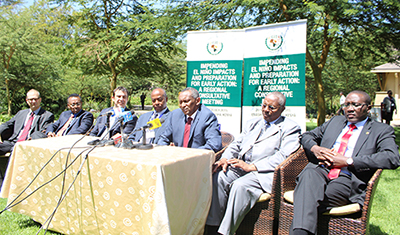 Ambassador Maalim during the press briefng

This two-day workshop (see related story The Greater Horn of Africa Region to Prepare for El Niño Impact at: https://goo.gl/xRQIr3) aimed at bringing together IGAD member states plus Burundi, Rwanda, and Tanzania in order to prepare for the impending effects of El Nino saw the release of a final Communiqué (attached below) addressing the issue at regional and national levels.

High level delegates from member states comprised of Members of Parliaments, Ministry cabinet members, and officials in charge of meteorological and disaster prevention and reduction national agencies enhanced the meeting through active participation and precious contribution to the drafting of the Communique’.

Ambassador Maalim, in his short opening remarks on day two of the consultative meeting, encouraged participants from member states to better practice information sharing for enhanced decision making at all levels in the region in the urgent matter of disaster reduction.

“The effects of El Nino are already perceived in some parts of some of our member states. I am convinced that we are in a position to provide a better response compared to some time back as we have been working altogether in building resilience to drought these last couple of years”, he said. According to Ambassador Mahboub, experience gained in drought resilience should benefit in this case of El Nino risk reduction through effective coordination mechanisms and pooling of resources.

He also reminded the audience that disasters brought by natural phenomena such as El Nino for instance, contributed directly or indirectly to peace and stability as well as to migration issues.

Mr. Push the presented scenarios were “of great concern from a humanitarian and economic perspective” and that “it requires close cooperation between governments, private sector, civil society, scientific institutions, as well as regional and international organizations, to rise to this challenge”.

He at the same time praised “the level of effort invested by the countries in developing detailed contingency and rapid response plans”.

In his turn, Mr. Pete Manfield, Head of Office, the UNited Nations Office for the Coordiantion of Humanitarian Affairs-Regional Office for Eastern Africa, brought precisions according to which “drought conditions already persist in Sudan, Eritrea, Djibouti and primarily in Ethiopia” while “excessive rain in parts of the region, primarily in Somalia, Kenya and Uganda could lead to widespread flooding, directly affecting up to a further 2 million people”.

He finally delivered the message that “OCHA and the UN system stands ready to continue its support to Governments in the region and to IGAD in the coming months ahead to increase preparedness and response capacity to meet increased needs”.###